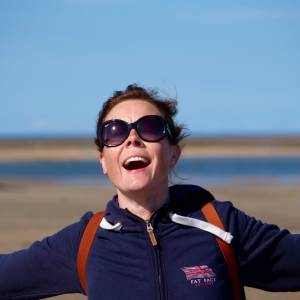 We walked across The Range nature reserve and found the little cove that we had been told about.

It was a lovely little spot, no-one else there but RobT, Jasper and I.

We had been there about 10 mins when we heard a helicopter approach. The helicopter circled around the cove twice leaving us thinking that they thought we were in distress.

After a while the helicopter started to get progressively closer and we progressively felt like fugitives that were being hunted by the law.

The helicopter started to hover on the cliff above us and we were so disturbed by its close proximately that we decided to leave the cove. Jasper was getting nervous because of the noise of the blades.

After heading up the steps back to the top of the cliffs the helicopter was still hovering.

What we realised once they had forced us from the cove was that there were on manoeuvres and basically were hanging about waiting for us to leave for the trainee pilot to practice his/her hovering.

We found out later that this is one of the areas where they do practice but I now know how Harry Hill from Goodfellas felt when he was being hounded by the law!