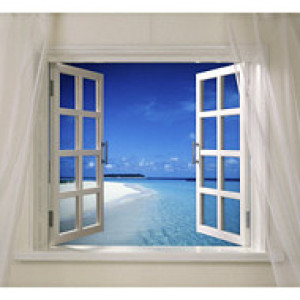 This man is a saint! Whether the current Pope canonised this man is quite another matter!

Brother Robert has a heart of Gold. Always smiling. He has a great sense of humour. Always making cups of tea and coffee for people and when everyone had finish, would then wash up, taking your cup before you realised what he had done. I only beat him to it on a couple of occasions, because he was engaged in conversation with someone else. I know it was a bit sneaky, but then so was this photograph.

Brother Robert, could not walk far, but he was very appreciative when I asked him first, if he liked to go out for a drive to the Needles and a Cream Tea in West Wight. Father Prior, of Quarr Abbey, had asked him out for a drive around the Island with a French Sister and a young French Student who was here to learn English. I got the feeling from Brother Robert that he was somewhat relieved not to be joining them.

Brother Robert is a retired Brother of the Order of Marist Brothers, a Catholic Order founded in France. He has worked in Lebanon, Asia, India, and a couple of countries in Africa as a teacher. He was a very patience man and I could imagine him being this way with the youngster he had taught over the years. He is fluent in English, French, and Latin. In his time he has worked as a Hospital Chaplain for nine years in Glasgow, where he now lives with fourteen other retired Brothers. He occasionally still celebrates/presides at Mass.

Like the Monks here at Quarr Abbey, he has been living a life of chastity, prayer, and obedience. If he wants to spend any money he has to seek permission from the Brother Prior and will be given enough money to cover his costs. The permissions given also covers clothing, shoes, glasses, and everything else that we take for granted.

Why should Brother Robert be sainted? Well, everyone who comes through these door and have never experience the various offices/service throughout the day. He is always on hand to show you which service sheets you need, where inside the booklet the service will start from and if you are new to Latin Services, show you what line is being chanted at the time, until you get used to following it for yourself. He helped me and a number of other people while I have been here. More importantly, he taught us when we should stand and when to remain seated and for that I miss his company.

What age do you think he is? And when he told me, I was surprised too...