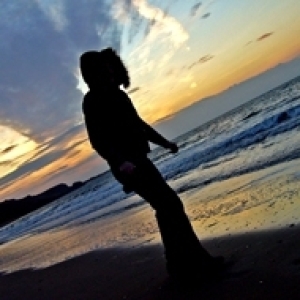 A lady called to me from behind our wooden gate asking if I have a tabby cat. She explained that she thought she had clipped him with her car, but that he had run away into the field. I ran along the road, into the field and along the track. I could see Blue lying ahead of me, almost directly opposite the cottage. When I sank to my knees and spoke his name, he raised his head. I gently stroked him once and then he was gone. I am not ashamed to say I sat in that field with him and howled.

Blue has featured in my journal ever since I began posting to blip in 2006. He would have been ten this year and has been a constant companion in my day to day. In real time today is October 13th and I have put off posting this all that time. I just couldn't face it. I guess time has softened his loss a little, but incredibly I still miss him and find myself looking for him as the light starts to fade or a patch of sun warms his favourite places to sleep.