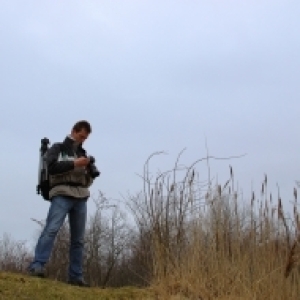 In The Netherlands the best period for enjoying autumn colours would typically be the last two weeks of October and the first week of November. So when Herman suggested to go capture some autumn colours on the first of November, I thought his timing was perfect! Agreements made, photo equipment all packed and alarm clocks set on silly o'clock.

Only then I realised autumn was very early this year. My excitement on the perfect timing declined a bit. Nature just doesn't exactly follow any calendars. Then again, it's always fun to be out there on early mornings. Herman found a nice location near "De Slotplaats", Bakkeveen, Frisia, NL. So we went there and found our way through the dark forest to a small basin.

As always we started looking around and making up our minds on possible compositions, then slowly but surely we setup our equipment and started experimenting and exposing. It was a very clear morning which helped us to pretty quickly being able to see more of our surroundings and its colours. And that first little bit of light got the excitement fully started again. There were still beautiful autumn colours around us....

Thanks Herman for a great autumn morning!