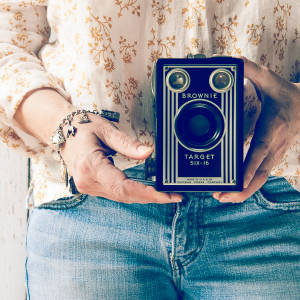 "Mama. How come some people think the sandy stuff in your eyes is from the Sandman and other people think it's fairy dust?"

For a moment I wanted to smack myself for telling her the fairy dust nonsense, but I just said, "I think people believe different things because no one knows for sure."

"Well, no one can know for sure who puts the sandy stuff in your eyes. It's night time, and it happens when you're asleep."

"Why can't anyone see who does it?"

"You're asleep, and your eyes are closed when you sleep, silly."


(Seriously, is it just me who thinks "The Sandman" sounds like a creepy character?)


Edit: I didn't plan for the man to be in the photo and my original "vision" was just of the street scene. The man was accidental. Even though I'm bothered by his legs being cut off, I felt this one suited the conversation I had today with my daughter.