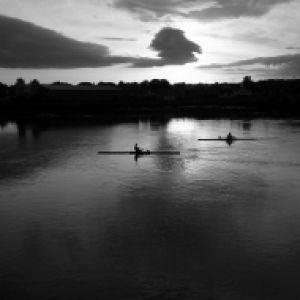 Three Bridges Over the Tweed

Just some facts about the picturesc Three Bridges of Berwick Upon Tweed
Berwick Bridge ? Built 1611 to 1634 by James Burrell. 355 metres long and 5 metres wide.Has 15 red sandstone arches with cutwaters which carry Doric columns and busts. The arches are highest at the North end ? 14 metres. Now only used one way for traffic.
Royal Border Bridge ? Built 1846 to 1849 by Robert Stephenson for the York, Newcastle and Berwick Railway, completing the linking of the East Coast Main Line. There are 28 high round arches in stone faced brick on stone piers. 38 metres above the Tweed.
Opened, officially, by Queen Victoria in 1850 in a cermeony which lasted 12 minutes.
Royal Tweed Bridge ? Built 1925 to 1928 by L G Mouchel and Partners. Built to take much of the through traffic from Berwick Bridge. Four concrete spans ? practical rather than beautiful. Much of the traffic for which it was designed has now gone onto the Berwick bypass, avoiding the town altogether.