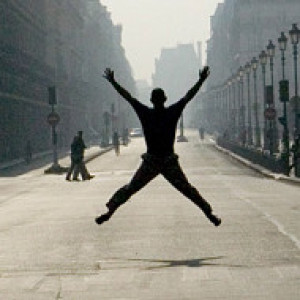 In Manchester for the first time in years, looking after a choir from UBC, Canada, who were singing in the cathedral at lunchtime. Unfortunately for them, it coincided with Manchester hosting the EUFA cup final between Zenit Saint Petersburg and Glasgow Rangers. We'd driven down from Glasgow the day before in the company of hoards of Rangers fans and the motorwary bridges had people waving Rangers flags to show their support.

Needless to say, the centre of Manchester was taken over by thousands of Rangers fans and a few Russians who'd made the journey. The fans were in good spirits, many of them well oiled. As the choir sang to an audience of about ten - several of them Russian here for the football - the chanting and singing Rangers fans could be heard outside. Most Mancunians had probably decided to give the city centre a wide berth for the day so my choir had no chance of getting an audience!

I took this close to the cathedral after the recital - if you understand the meaning of the shirt you probably know that political correctness is not something associated with football.

The choir were quite happy to get out there and mix with the fans as they had not come across anything quite like it in Vancouver.