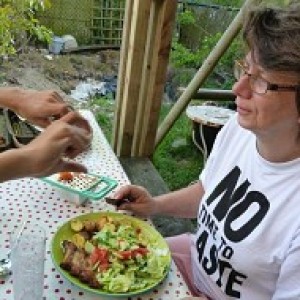 Meet Plush, our cat's unofficial boyfriend and also the neighbour's cat. Poor guy is always locked out during the day and more often than not he stands at our back door, looking cute, whenever I open it to let our cat out for whatever business.
We already have a written off rabbit hutch (but with a sturdy roof) with a good layer of straw and an old towel in it just outside the back door - also known as the Cat Hotel - but now it was raining and he looked rather the worse for wear (that's a new ding in his nose I think) so our cat and I, we stood aside and let him have a go at her bowl. He scoffed for 2 minutes straight and then went to stand at the back door again.
I was allowed to pet his head, after which he hopped into the Hotel and made himself comfortable. We have far more animals in our garden than those officially ours - I think they prefer the jungley feel over the trimmed ones that are theirs ;)