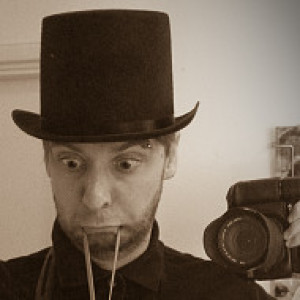 My 365th consecutive blip :)... Came close a couple of times, but never missed a day :D

We started with the thought of making numbers-with-people on the floor. The thought was to go outside and ask random people to make a 3, a 6 and a 5... But it rained really bad, so we stayed inside and called some people over ;)

After the 365 we did a couple of other numbers (not featured), and then proceeded to do the whole alphabet (featured). I've got a slash, a star and a colon too, but when i put it all in it became to crowded, so they ended up on the cutting floor. Sorry bout that guys :)
If people want to see the whole series i may be able to put some online somewheres. Drop me a line?

* We had lots of fun "photoshopping" with black-on-black -> try to find the method used in e.g. the O and the P :)
* Check out the T -> totally unnecessary acrobatics there, but lots of fun
* Two people showed up with black pants. Vero changed into something whiter, Arjen used it as "photoshop"-legs -> see the S for an example

Thanks section:
* Thanks to the blipteam for this great free site. You rule
* Thanks to Douwe, Arjen, Ilse, Kim, Veronie and Peter for their patience, ideas and willingness to be blipped
* Thanks to everyone viewing and commenting on my shots :)

* @Moderators: To prevent the black background to be considered a "border", i used a shot of the backdrop that's in all the shots as background. So it's all foto-material in the final collage :)

Now i should go and spread my balloon :)