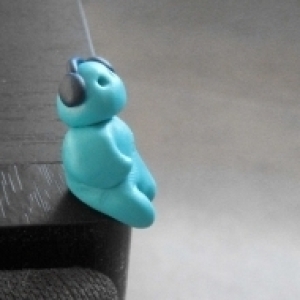 These are plastic rings that you stack onto a pole in size order - or which you pull off and drop over the edge of the sofa, in River's case. Much more fun.

Just now I was viewing today's images to decide which one I was going to Blip before opening it up in GIMP. When I've chosen I vocalise the number in the file name (18 today), going on the theory that saying something out loud makes you less likely to forget it the next second.

GIMP loaded, I'm zooming through my folder towards where the new files have been placed. I recall the number by thinking back to the sound of my voice, but it's at this point that I realise I actually said nineteen and not eighteen. I know I said the wrong one because I have a visual memory of the '18' I read off the file name. I've been thinking eighteen all along; I have no idea why I said nineteen.

This was not a one time weird thing but something I keep catching myself doing lately. I keep vocalising the wrong numbers. And I keep realising it when I come to recall them, because I remember what the number looked like and it wasn't the one I said.

On a happier note, I do find the vocalising thing works when numbers aren't involved...! :)