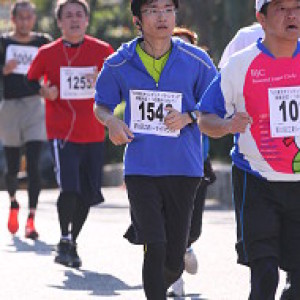 Interesting to see this

I had several photos to choose for today, but I'll go for this one since it looks more "Japanese".

Splended weather today. The news has mentioned that this weekend will likely be the best time of the year in terms of weather, temperature and humidity. Actually it was excellent.

A little excursion with my dad who is on a business trip to Japan but currently works in the US. We were wandering around suburbs of Tokyo to take a look at some nice trekking spots and traditional Japanese spots.

And see what I've found in a city called Kamakura where the first ruling of samrais have been established in 1192. The people inside the building are having a traditional wedding. In front of a huge audience.
Wow, I think I need lot's of courage if I were to do something like that.

It's slightly difficult to see but the groom wears black and the bride wears white, with relatives on both sides and a Shinto priest in the middle (at this moment behind the columns).
On the left, they're playing traditional music with a kind of Japanese drum and a flute.
In front of the groom & bride you can spot some gifts being given to god (a shinto god which represents nature and are ancient emperors from the 3rd century) which is just behind me beyond 61 steps that lead to the main Shrine.

Well, congratulations to whoever they are (^^)

Again a wonderful day to explore and take my dad around places that I know around Tokyo.

Finished up with some Chinese near the China town in Yokohama which is largest China town seen in Asia. A very familiar place I've been frequently before I was off to Scotland. Obviously food was delicious, but it was even happier to tell the master that I've safely returned from Europe to tell plenty of my stories that I've experienced there.