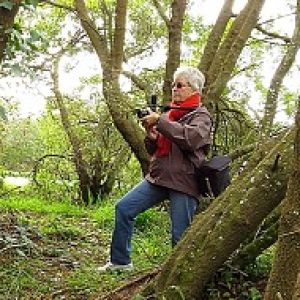 This morning, Blip mate and I set off on another intrepid adventure, driving deep into the hills on unsealed roads, where we had never been before.

When we reached the highest point, we had a view out across the  tidal estuary, the mudflats where the tide had just begun to come in and ultimately, Tasman Bay. Unbeknown to us we had strayed onto private property and the owner marched over to inform us. I think she was quite relieved to find we were a harmless pair of old intrepid ladies

So here you have a  hazy Tasman Bay as seem from private property high in the hills.