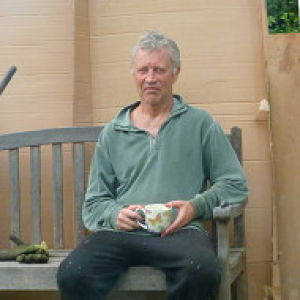 The Churchyard, Lake and Hall at Hanworth

A clear bright day with a heavenly blue sky and the occasional streak of cirrus. I footled around with a guitar for an hour or so, and G. called by to collect some rheum (ornamental rhubarb) plants I had potted up for him. Later on I drove into Norwich for a couple of hours of work. I came home by way of Hanworth.

The church is always open and a has a beautiful vaulted wooden ceiling. From the churchyard you can look out across the valley and the artificial lakes created by the notorious owner of Hanworth Hall, Michael Barclay. A former army Major, Michael Barclay was gaoled for four months in 2006 for a whole string of offences involving the purchase and possession of rare and endangered bird species (which he had stuffed) and their eggs. The prosecutor in the case which was heard at Norwich Crown Court, was Andrew Bird, a pleasing detail.