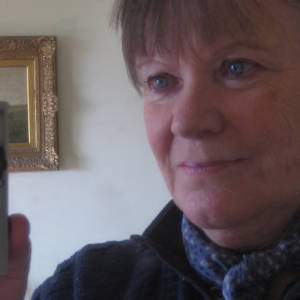 Drove down to Sidmouth which is full of Grade II listed Regency and Victorian  buildings.  The town used to be a little fishing village and then when the Napoleonic wars were raging the wealthy English could not travel abroad for their tours or for health reasons so they settled here because of its mild climate, being in a sheltered valley leading down to the sea.  They built "cottages", many of which have now become hotels along the Esplanade, or behind the sea front are roads with Gothic and highly decorated houses.  The young Victoria came and stayed here with her parents before she grew up and was made Queen.

The photograph shows the Esplanade to the east with the great red sandstone cliff behind reaching up to nearly 500 feet, the sea side of Salcombe hill.

On the way back was a road block and we thought cattle were going to be driven across but instead there were about 100 donkeys of all shapes,  sizes and colours, trotting across the road some with red collars and a couple of elderly ones at the back.  They were some of the residents of the famous Donkey Sanctuary on their way to new pastures.