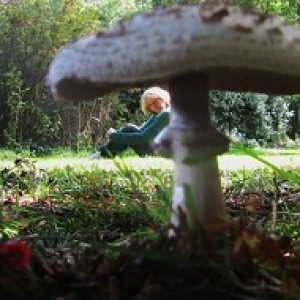 Continuing the Alpha(Bet) males - The life in my men in my life July challenge.

S is for Summer time.

The cat is sleeping under a shrub in the shade, and I took some super shots of him, but in the end this butterfly in clover sums up summer slightly more succinctly.

This year I have been recording the numbers and species of butterflies seen within a couple of hundred yards of my home. The results have been dismal, so it was with great joy that I spotted two Marbled Whites today. This one is a male, and just look at that cute row of hearts along his wing margin. I'm sure it's an omen!!

S is also for Simon, who started my love of butterflies.

I met Simon on a family holiday in Cornwall, we were staying in the same place and he invited me to go butterfly hunting with him. I think we were 12 at the time, I recall most of that week being spent, just the two of us, on the cliff tops and meadows with a large net and a jam jar. I am ashamed now to say, it was back in the days when butterflies were killed and set out with pins to add to a collection. Thank goodness we are more informed and responsible now.

I recall the sweet smell of the carbon tetrachloride used to soak a pad of cotton wool in to bottom of the jam-jar. The fumes would soon subdue and then kill the poor victim, so that it didn't damage its wings by flapping them.

If ever I became involved in substance abuse I'm sure it would be sniffing, I adore the smell of glue, of second hand cigar smoke, of the seaside, and likewise, Carbon tetrachloride. My nose is twitching at the very thought of it as I write.
Here is Wikipedia's slant on it:
Exposure to high concentrations of carbon tetrachloride (including vapour) can affect the central nervous system, degenerate the liver and kidneys and may result (after prolonged exposure) in coma and even death. Like many other volatile substances, carbon tetrachloride is prone to misuse by inhalation, due to its possible depressant and/or dissociative effect upon the central nervous system. Use of carbon tetrachloride in this manner presents serious health risks, and may result in toxic effects described above.

Hopefully the odd whiff back then hasn't had too many long term effects.

And, Simon? Well, the next year when we went back to the same place he was there again with his family, only heavily into surfing this time. I followed him into that activity too. He went on to live the beach life in Australia so he could continue to surf, he also became a psychiatrist specialising in substance abuse.

I wonder if the CCl4 had anything to do with his career choice?