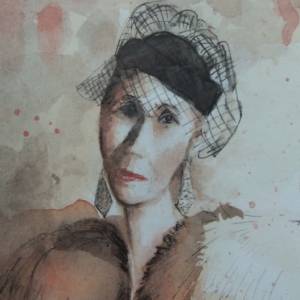 I was going to tell you today about this pernicious weed that grows in my garden - and about how I saw it for sale once in a local garden centre at some elevated price. It horrified me to think that someone would be tricked into paying that much money for something which they would really want to get rid of pretty soon when they saw how it spread itself.

But then - as is the way of blips - when I was finding out what its name was (Hieracium aurantiacum) - I also found out lots of interesting things about it. Things like - it's a native of alpine regions in central and southern Europe and it was brought to the British Isles in the 17th century as a remedy for poor eyesight. The belief was that it was responsible for the acute vision of the hawk - hence the derivation of the scientific name from hierax the greek for hawk.

The bright orange flowers are borne in clusters and this gave rise to its common name Fox and cubs because the first flower to open is larger that the surrounding opening buds. Other names that it has include Orange Hawkweed, Devil's Paintbrush and Grim-the-collier.