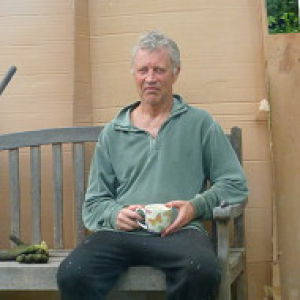 A lake on Flores

We flew from Ponta Delgada to Flores with a Portuguese airline on a propeller plane arriving at a charming little airport i
In Santa Cruz. A man called Jorge was waiting for us with a sign reading "Mrs Henderson" which made me smile because Hanne Lene almost never calls herself Mrs Henderson.
His colleague Silvio arrived a couple of minutes later in his taxi and took us to a large supermarket where we stocked up on supplies for the week. Silvio was dressed in fatigues and spoke English with an American accent at breakneck speed. He drove us across the island, stopping at some beautiful and scenic points in the mountains to show us the views and tell us about the local landscape, and hiking trails and availability of restaurants and swimming places.
About five o clock we arrived in Faija Grande and then on to our rented home in Ponta de Faija.

Early evening after a cup of tea we decided to walk down to a river pool that Silvio had mentioned on the edge of Faija Grande. A paved path built in local stone led from the lane, along the bank of a mountain stream and uphill towards a pool, a couple of hundred yards away. Ginger lillies and canna lillies were growing in profusion at around the banks and little grey-blue and lemon yellow wagtails were flitting from boulder to boulder in the evening sun. It was like an enchanted garden. After a few minutes we came to the foot of the waterfall, a cascade dropping hundreds of metres into a large rock pool. So cool and fresh.