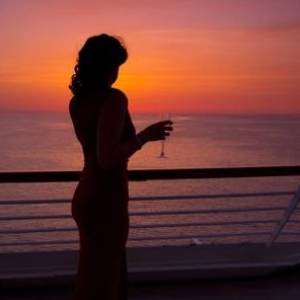 Hiking up to one of Kotor's highest peaks!

This day absolutely killed me! We had a hard show the night before and then I got up to watch our final sail into Kotor at around 6am so I must've had around 3/4 hours sleep before the hike.


We got off the ship around 8am and eventually started our hike around 10am. It was this day that I started to know I probably wasn't as healthy as everyone I was working with! Every 50m I had to stop for breath/chest tightness but my friends were able to power on up the mountain. A few months later the doctor at home confirmed I had somehow become anaemic on the ship and in my last month of my contract I did have costochondritis which healed itself when I came home and finally stopped dancing and going on long hikes every day for 11 months straight! Don't know how you can develop anaemia when you can eat endless amounts of free red meat on board!


Anyway, I powered on to not give in to the unusual weakness I was feeling and was quite behind the group but we still made it! My friends had already done this hike before but never found the top viewpoint. I think after about 3 hours hiking we finally made it to this point! We started right next to the old town which is hidden behind another mini mountain in the photo. We must've spent a 20 min break here in order to make it back in time but I could've stayed there for hours!


My friends decided to run all the way back down the mountain to make it in time for their shift but I figured I'd have enough time to walk back.... I think I was back on board with 10 mins to spare but it was very close and I thought I was going to be late! Better a careful walk down than going over an ankle by running and having to be medically disembarked if I can't perform my job! I had the evening off so it was fine for me but I had bad bad DOMS for 3 days. I couldn't even walk or move or anything!! Luckily dancing was fine as I was so warm in the shows and had enough ibuprofen to mask the ache.


It was the hardest hike of my life but most definitely worth the views and the memories! <3