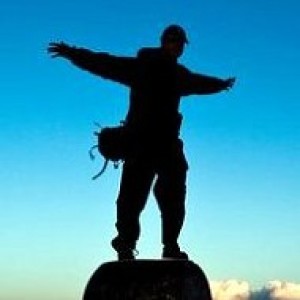 a man X the castle

I did it again. Woke up early in the morning and went up on the hill.
It was another great sunrise today during the chilly morning.
I chose a different gear for today' s morning (D7000 + 70-300mm lens) which was providing a different perspective.

Give you one favourite song for today' s morning. Do you know that song?  ;-)

Little fluffy clouds by THE ORB

The truth is that song is more about the sunset :-)

Anyway my stay at Arthur' s Seat was fun because there was a chance to see the wind farm like the part of the sun on the horizon. Must be  somewhere near Galashiels probably. See an extra shot.

When the sunrise was over I continued on my usual way back to homebase. Heading down from the Arthur' s Seat and going up to Salisbury Crags as usual. I spotted another local photographer standing on the cliff when the sun weas going over the edge of Arthurs Seat. So I used this scene for my composition. Of course, you could see and recognize that I oversaturated colours for better contrast between the cliff and the castle.

It reminds me one favourite quote:

"I paint objects as I think them, not as I see them" by Pablo Picasso

That' s the way I would like to see the colours of the rocky cliff which is mostly more about the combination of yellow and golden colours during the early morning.

And the rest of the route?

I was doing the usual activity : "collecting the rubbish while walking"

My score for today:

And right now I' m preparing myself for backshift at work (working during the weekend as well).
So don' t do the same activity like me.  Don' t work, just relax.

Simply enjoy your weekend off everybody ;-)