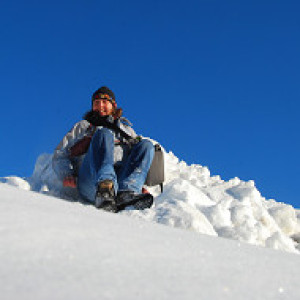 Woke up this morning and it was raining. RAINING! Who said it could do that?

After a relaxed and reasonably good hotel breakfast we went out to Halibut Point (just for the Halibut, you understand). Really, the names around here sound like they were stolen out of an English novel - Pigeon Cove, Whale Cove, Paradise Cliffs, Folly Cove, Cathedral Rocks... But I digress.

Halibut Point is a State Park, and it's all about granite. A huge waterfilled quarry dominates the landscape (no swimming sadly, although it looks perfect) and large chunks of hewn rock are piled along the naturally rocky shoreline. It's easy to see how the harbours of Cape Ann were fortified, and indeed, how Rockport got its name.

The rain didn't spoil our walk, it probably enhanced it as it was warm and other people stayed away. The world is awash with colour -he golden rod is in bloom, the sumac and the purple loosestrife are turning red and purple asters (Michaelmas daisies) are popping out everywhere.

And then there were the birds - suddenly they were everywhere - thousands of them. They filled the air, they covered the rocks, they occupied every perch on every tree. Tree swallows. There was a little rock garden full of cairns; Jimmy built a new one while I photographed the swallows. It was magical. And then all of a sudden, without warning, to a bird they took to the air and were gone.