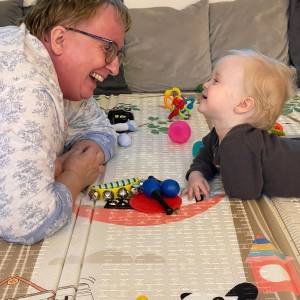 The Bayon Temple is part of the enormous world heritage site that is Ankgor.  We were fortunate enough to be able to visit it this morning and were amazed by all the different faces, figures, ornate carving and building work that has been reclaimed from the jungle.  Amazing!    What a place!  It was also incredibly hot at 9am!

We went from there to see the Terrace of the elephants which you can see in extras.  The other extra is a fun shot that the guide took of me!

We had a bit of a rest and a swim at around midday and then went out again this afternoon to another temple - smaller but further away at Banteay Srei where the carving was especally ornate and beautiful - another extra of that!

We then called in at a school for disadvantaged children who are homed, cared for and educated, and allowed to paint and be creative by a wonderfully inspirational man (an artist) who is running 8 similar schools in Cambodia.  I was so impressed and overcome.  I was shown round by a your girl called Polhu.  As part of the fund raising, the paintings of the students are sold.  Polhu had four for sale so I bought them all and promised that I would do my best to do some fund raising for then when I get home...  Mr Leng was interested to know that I was an English teacher and suggested that I might like to go and do some voluntary work...