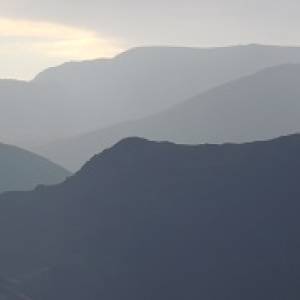 Freespiral will be having me marched out of the gang if I keep this up.
It's another non-well.
I know it's there but I'm just not sure where exactly.
It's on the map as being in the Wray field and the best reference I have is that of Mary Armitt's ...

'Church and well are not, however, close together.  The well springs in the flat meadow between the path to the Wray and Wray Beck, but is now covered in.  The adjacent bay of the lake is called Well-foot, and the bridge over the beck has the same name ; and when the Wray property was “ boundered ” in 1683, the “ wellfoot bridge ” was spoken of.'


When we used to walk up here G used to talk about an old spa that was founded here. I've never been able to find any evidence or anyone who knows anything about it but today I thought there might be a few indicators on the ground (first pic in collage) and a track leading to it. There's no evidence to be found of it anywhere other than another brief reference in Mary Armitt's piece. Looking down on the field I was persuading myself that the boggy ground was the well (middle pic). Then as I walked round I wandered about the strange little walled enclosure as I walked past St.Oswald's (house). In the main picture at the bottom you can see the freshly restored St.Oswald's church and the field in question is in the bottom left. You can also see part of the lake in that picture to give you some idea of the bigger picture.


I've included this into Marcus's collage challenge because it shows a little of the story of the well hunter's dilemma.

I've also included into my #walkingtheline series because it relates to G's memories and the Thirlmere pipeline runs through the valley that you see here in the bottom picture. And I ended up once more overcoming my social anxiety and going to the candlemas service again at Wythburn church and met up with Michael who's wife has sadly recently died. I heard the bell ringing as I wandered the shore of Thirlmere where I'd been vacillating and then rushed over. Just like last year you could see the breath of the congregation rising like spirit into the clouds hanging over Helvellyn.

There's a bit of an extras bonanza ...
First extra - looking across to Rowan's Field and up to Muggin's gap (with a nice example of a lonning for Paula)
Second extra - Thirlmere and Lonscale Fell
Third extra - Blencathra