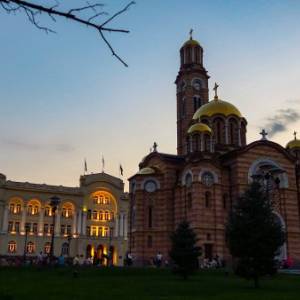 Englishman in the Balkans

It's time to come clean. To "out myself" I suppose.

After leaving home at 15, I joined the army as an apprentice tradesman. The next decades until leaving at the age of 40, were quite institutional and disciplined as you might expect.

Individuality wasn't the order of the day.

Although my career was very successful and a subsequent 3 years with the reserves even more so, I was quite rebellious in my own way.

I promised myself that when it was time to return to "normality", that I would buck the trend, and would be anything but a stereotypical middle-aged person.

So I forgot about short hair, behaving properly and maturity.

After all, life's too short. Right?

One of my many acts of defiance against those "norms", was to embrace wearing  colourful socks. EVERYDAY.

Not only that, but ODD COLOURFUL SOCKS!

Although people comment often (and most are kind and humourous), some can be aggressive, as if there's something wrong with me.

And here comes the "outing" part.

That institutionalisation I received at age 15, has taken a long time to work it's way out of my system.

So here is the latest pack of replacement socks, given to me, by my granddaughters.

What eccentricities do you have? How do people react?