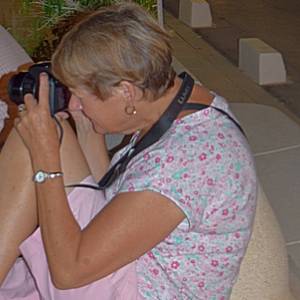 Sunny and bright with a slight breeze.

We had a few jobs to do this morning which we managed to achieve    and after lunch went to see our Agent through whom we rent the apartment.

We had found a storage facility on line in Castellon and had been a few weeks ago but the office was closed and no answer on the phone.   So we asked Jose Louis if he could phone.   Also we enquired about an apartment when we return in October.   He said it is too expensive, the storage in Castellon and that there is some here in Oropesa and would get us an appointment to view.   Also some apartments to view in the next few days.

So the wheels are in motion, we await hearing from him.   On leaving he asked me if I liked wine, to which I replied 'yes'!!   He fished about in some boxes and produced these two bottles, one for me and one for Alan, promptly saying 'Amigos siempre'.   Such a lovely man.   I think I will ask him if I can take his photo for my Blip.