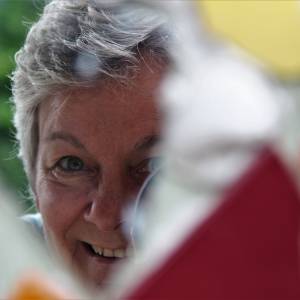 Jerry has been "cleaning: out his shed which is a good size building of two rooms.  Most of his "stuff" has been relocated from one room to the other and he mumbles that he can't find anything now.   He "found" a box of bottles that he "found" out in the woods during his various hunter forays and scouting adventures.   I told him that I could use some for still life images so now about a dozen have made their way into the house.  Where they will probably be added to the other "found" things I have.   I only kept the ones that were odd shapes or pretty colors.

This tiny bottle is about 2 inches (5cm) tall and is a perfume bottle from "E Hoyt and Co, Perfumes,  New York".   I do like it when a label shows up.  No date though but I think it might have been a sample bottle.

A tiny thing for tiny Tuesday.