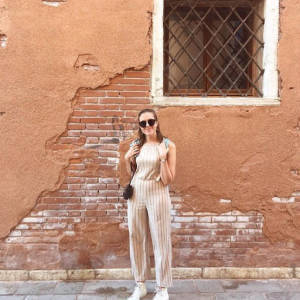 Walked (it was a bit further than I thought so plenty of “are we nearly there yet?” from the others) to the Sagrada Família first thing. It was impressive but hideously busy and by the time we got there it was aaaabsolutely boiling.

We got the metro to Parc Güell and soon regretted moaning about the heat - we emerged from the subway and the sky was black and it was just starting to rain.

Thunderstorms had been forecast but for a while the drizzle was just nicely cooling so we marched up the biggest hill in the world and into the park. The view over the city was very impressive but we could see the storm coming so decided to find a cafe. Five minutes later, still no cafe - instead we were huddled on the floor under a bush being pelted with huge hailstones and trying to shout to each other over the loudest thunder I’ve ever heard, while the ground turned into an ankle-deep muddy river. Not so nicely cooling.

After a while we decided that walking back to the metro couldn’t do any harm - we couldn’t physically be any wetter. Quick trip back to the hotel to change and dry our hair, and then back out to the seafront for the evening (evening: Ice Bar, Swedish stag do, broken umbrellas, beach crisps, Hats On Tour, chips, taxi snooze, home).