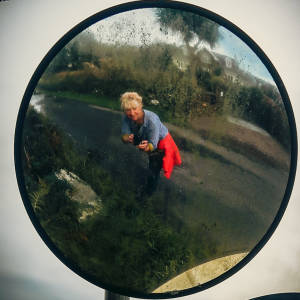 Out of the Wild Sky: Oiche Shamhna

A trip to Kilcrohane then the Goats' Path to Bantry. I was in and out of the car like a yoyo for there was the most spectacular rainbow which went on forever. Did I choose the right pic - much umming and ahhing for I rather like the splodgy sky of the extra. It seems fitting for the day that's in it - Oiche Shamhna - the day when the veil is lifted and glimpses of the Otherworld can be seen, the day that the Aos Sí, the Good People or the fairies can enter our world. The veil between the two worlds is very thin, surely nowhere thinner than between the sky and the rainbow or where the rainbow meets the sea.
It's also the start of Samhain, one of the four great Celtic festivals and start of Winter, the time that the Earth becomes dormant and the dark descends. Forget the grisly masks and axe murderer vibes - I reckon the Macnas Parade in Galway has it right. The theme was Out of the Wild Sky - Here's a taster
Incidentally that little white thing about to be engulfed by the rainbow is a lighthouse on an island.

And an odd sight in Bantry square where they were setting up for Halloween Disco tonight - she was not moving. Nor was she getting any customers. The man selling sourdough bread nearby, dressed as Dracula, was doing better.

Last night's film - The Heiresses - didn't do it for me. Not much passion and not much love, all a bit dull though Himself thought it had its moments. All I can say is that Uruquay (I think that's where it was set) have very different prisons to here.

And the Christmas cake is cooking as I write- still in my pinny.