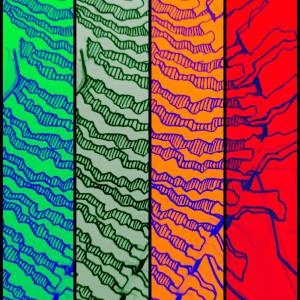 Dark & Twisted: The Nature of Plastic.

Different kind of post, inspired by the art and recycling of the McManus Gallery, Dundee... Although technically not a great photograph, I hoped that may serve a point, or perhaps a reminder - that we as a global community need to act, to rid the world of plastic.

It is estimated by 2050 (approximately 30years from now) that there will be more plastic in our occeans then there are fish (by weight) - a sad fact.

Another tragic fact is many marine organisms can’t tell the difference between common plastic items and their food. This leads them to often starve, as creatures whom consume plastic cannot digest it, and more often than not it fills their stomachs, thus preventing them from eat real food. In many cases the creature dies.

This happens to many animals from loving sea turtles to cute sea lions/seals, to extraordinary sea birds such as albatrosses/puffins to cool fish, and beloved dolphins and beautiful whales. Plastic is endangering them all, and we need to stop it.

As currently 91% of the world's plastic is NOT being recycled, and with 8 million metric tons of plastic being thrown into our oceans annually - that's alot of damage. Unfortunately this number is likely to increase tenfold by next year: 2020.

I don't wish preach. But in the great words of Timothy Minchin: "Do something drastic to rid the world of plastic".

There's lots that can be done. But only you can do it. Just look it up, there's loads of organisations world wide and in local communities attempting to combat it. It's up to everyone, not just some.