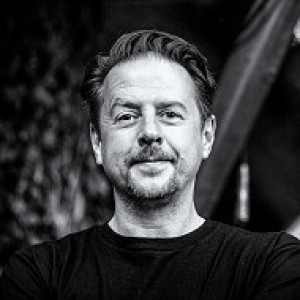 Alf’s Prom this evening and so we had the tricky job of finding a suitable car.

Alf, as you know is a complete Petrolhead and so the car had to be something interesting, something with some meaning and something with 4 seats. My Jag and H’s Porsche were never going to make the cut.

We thought long and hard and in the end, decided on this TVR Cerbera. ‘A TVR Cerbera’ I hear you say, ‘Made in a shed in Blackpool’, ‘What's special about that?’.


This Cerbera was the 27th off the production line, built for Ian ‘Hendstock’ Hendry here he is when we went to the factory to see it in production in the summer of 1996.

Ian owned the car for several years, eventually, however, his circumstances changed and he needed to sell it. Luckily for him, I needed a 4 seater as I was just about to become a dad so I bought it.

The car had been in the wars a little and needed some work so we shipped it to Simon at Offord Motor co who got it ship shape.

Here it is outside our old house with our TVR Griffith.

I ran the car for 3 years or so, as a daily driver and covering a lot of miles for work it was loud, reliable and a lot of fun. It also cost me a fortune to run and made me partially deaf. Regular trips to Simon at Offord for servicing and mild upgrades meant that the car constantly improved over time.

Sadly though my business mileage was on the increase and so I decided to sell it and buy something more sensible, a deal was done and we waved it off, never to see it again.. Or so we thought.

A couple of years later I got a call from my friend Andrew, ‘Your old Cerbera, was it P32 MLB?’, turns out he’d just bought it. Andrew owned a car body shop at the time and so over the next few years the car was completely refreshed, new suspension, outrageous exhausts, engine work, and the most amazing paint job I have ever seen on a car. The colour change is incredible, blue, purple, green gold, it is amazing.

Andrew is clearly a lovely man, we don’t see much of each other any more but there was no hesitation whatsoever when I asked if there was any chance we could borrow it. The slight problem was that it had hardly been driven for two years and was sat in a lock up near Ipswich.

Plans were hatched, Simon and the Offord team said they would help and so one sunny Saturday H, Alf and I met Andrew at the lockup. The car was outside, gleaming and running, loudly. It had no MOT and a few minor niggles but was very roadworthy. So we took it to Offord.

After a few days Simon called, the car is in really good shape apart from one minor issue. The wiper motor had seized. Wiper motors for early TVR Cerberas are no longer made. This was not good. After 2 weeks we still hadn’t managed to find one, no wipers, no MOT, no Prom. With a few days to go I got a call from Simon, Andrew had found a chap in the Midlands who had one that although was not quite right, could be made to fit. It was ordered, Simons team worked wonders to make it fit and Alf, Alice and I picked the car up earlier this week.

I’m really pleased we managed to get it sorted, Andrew is a star, Simon is a calm genius and Ian ( who was Alfies godfather )would have been incredibly proud.