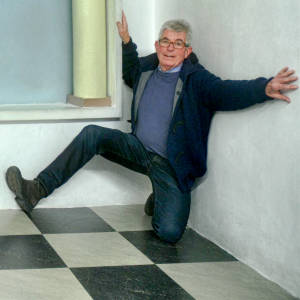 An explore of Morcote and a lake swim. Two celebrated churches set themselves up on the side of the mountain overlooking the lake. One more monumental than the other but both with their charm and surprises. Up and up the steps and alleyways to gaze at the optical illusion wall paintings. Alcoves and pillars painted onto flat walls. So deceptive that you have to touch them to check. Then down alleys and steps to the waterside.

Later a bask on the hotel’s sun terrace and a swim in Lake Lugano. It’s warm and the sensation of swimming in open water is a real thrill. Back for more later.

By the evening we were ready for a stroll into Morcote – a tiny but perfectly formed waterfront. The restaurant choice delivered spaghetti with lobster with friendly staff serving at the Hotel Del Posta. Walking back to the car in the dark we waited at a zebra crossing for a moped to pass by. Instead he stopped for us and called out a goodnight and have a nice evening. It was our waiter giving a beaming grin and off he sped.