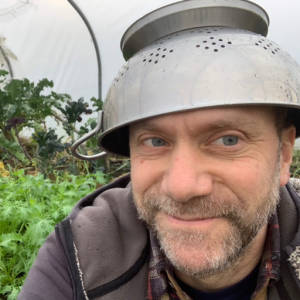 All my stuff is dry. It’s chilly outside, but the sun is rising and the sky is clear. It will be a hot day.

The early route is beautiful. There’s forest, vines, olives, lavender. Later, the GR mainly follows metalled roads. This gets worse as I plod wearily into Manosque in early afternoon.

The map doesn’t agree with the road markings, and there’s building and roadworks a-plenty. I follow the map, but have to take a detour to avoid a huge plume of bees.

I walk past a huge apple “orchard” - all under nets - and onto a main road. This takes me over a bridge redevelopment, with no footpath to speak of. Eventually, I’m back on dirt tracks, but not for long.

It’s after five as I slide into Gréoux-les-Bains. A thermal town, full of people even older than me. I consult tourist information, drink a demi (with poi-chiche à la maison), and head for the “Regain” campsite.