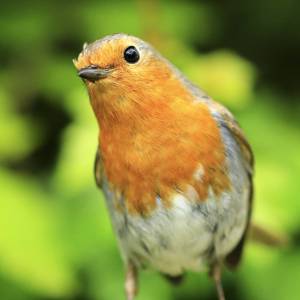 Terrifying this pheasant. He's got worse. Is it possible? YES! He now runs from literally nowhere, head held low & jumps in the air & kicks the broom, lashes out with all his might & then takes the brush bristles by his beak & shakes them about like a dog with a rabbit. He is T-E-R-R-I-F-Y-I-N-G & we can't go outside now into the garden, that's OUR garden without our defending weapon which is the broom (which will have to be replaced at the end of this as the bristles are being torn out by a very, very, sharp angry beak...!)

The other day - this is will make you laugh - our neighbours next door watched in horror as my dad drove down our small lane, around 400 yards to the main road, (down a very steep hill & up again) chased by, yes, you've guessed it 'PSYCHO PHEASANT' - another resemblance to a dog chasing a car.

Our friend Matt thinks it's totally hilarious. But it's up to him to capture him on Wednesday. We've had quite enough thank you. Psycho will be transported to a woodland somewhere so he can find a female to actually FIGHT OVER. As whenever we feed the birds in the afternoon, one of us, has to keep him off with the broom.

Although part of me will be so sad to see him go. He's a handsome fella, takes an amazing photo & I really feel sorry for him. And once released, will he last? As pheasant shooting is big business here, he's such an easy target, as he runs straight for to you.... so I'm in two minds, what shall I do? Release him elsewhere or put up with his terror?