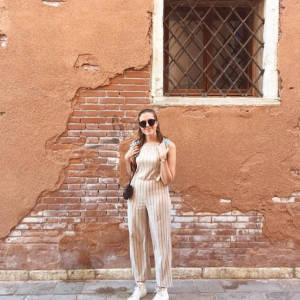 Day 1 in Milan. We had early trains booked for the next couple of mornings so purposely had a lazy start.

After a late breakfast we headed into the city, first to see the Duomo then escaped the crowds and explored lots of back streets.

Had some of the best pasta I’ve ever eaten from a little (and very popular) food truck for lunch, then got the metro out to the big art gallery. It was closed for a private event so we just went to the cafe next door, the Wes Anderson designed Bar Luce. Ridiculously photogenic and some delicious ice cream. We later found out that the gallery was closed for the Prada MFW show, and that we’d mjssed an appearance by Wes himself by about an hour. Gutted.

We found the little print studio on our hipster Milan map and ogled all the things in the shop. Pose mentioned she’s a printmaker and the man in the shop let us in the studio at the back where we could geek out over all the letterpress machines and we even left with some free test prints.

In the evening we found a supermarket and made ourselves dinner, followed by wine on the balcony, some board games, and rapping/dancing to the entire first half of Hamilton.