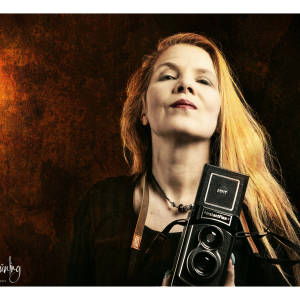 I was late this morning and was just u when Dougie arrived at 10 am.
Then my I Mac was frozen and did not boot up!!! PANICK!
Luckily I could sort it easily!
I went to get my nails done, I wanted red for the party.
Back home Dougie and I repotted the monster plant so that it is now pointing up instead of growing sideways and needing a whole room!
We had a chat, talked about what needs to be done for the party and then he went off and I felt tired!
Had a call with Kathie who loves her pictures so much and later in the evening I had a LOOOOOONG catch up with Kevin.
We are just off the phone.

My blip is also rather crap.
I did not feel like going out again as it was wet and cold, so I faffed a bit with my favourite ring and the extension tube on my kitchen table.
I was to lazy to work properly in the studio, so its a very amateurish shot ;)