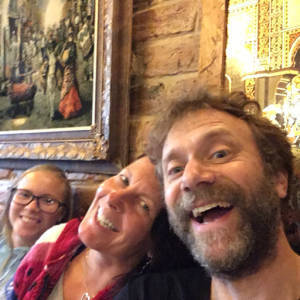 Claire’s sailing. I muck out the chickens and move things about.

In the walled garden, the sheep are happy to see me. They’re both skittish, but one is extremely jumpy. A handful of feed each day keeps them relatively manageable.

I’m making ratatouille in the slow cooker. Thinly sliced, it’s really tasty, though not as pretty as the version shown in the eponymous film.

We eat it with the last of the pasta from Green City. We used to buy things in bulk (a hang over from the Acme days), but all that’s left is the things that we don’t really eat.

Film tonight: Black Book. The most successful Dutch film ever, set at the end of WW2.