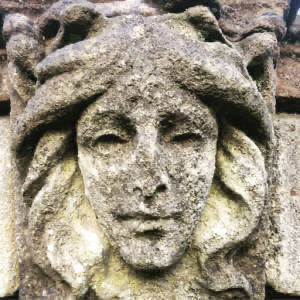 looking up and out

Lovely walk in Pollok Park today in between showers. Never noticed the lions flanking the gatepost before, nor that they’re licking their noses. I wonder what the significance is?

Edit
A quick google search has filled me in. These are heraldic lions and they generally are depicted with their tongues out. Showing claws, teeth and tongue means they are armed.  Think of the Scottish lion rampant flag or the English three lions.

I guess the tongues sticking up to their noses rather than horizontally was an aesthetic choice and, thinking about it, horizontally would mean it would also wear easily.

Did you know that to smell lions open their mouths and stick their tongues out? It allows them to “taste” a smell to find out if something is worth eating!

This is a lion sejant rather than a lion rampant. Sejant means sitting on its haunches with both forepaws on the ground.  Rampant is tearing up with only one rear paw in the ground.

Amazing what google and Wikipedia can tell you!

Finally the sculptor is John Marshall who was working to a design by Hew Lorimer, another sculptor, and they were carved at Hew’s studio in Kellie Castle, Fife.