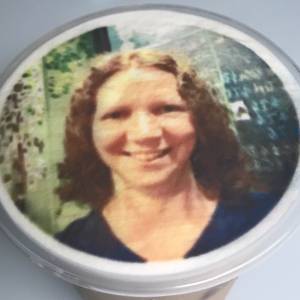 When I got home from collecting the shower valve from Screwfix yesterday, I looked at the fitting instructions. Wrap the joints with plumbing tape, the illustration implied.

Plumbing tape. I have some of that from when I bought a new shower hose ages ago. I remember thinking then, as I put it in a container in the shower room, that I’d probably never have another use for it ever again.

When I rummaged through the container, I couldn’t find it – even when I emptied all the contents, one item at a time, into the sink. Where could it be? In a different container? In another room? I couldn’t find it anywhere for love nor money. Mr Pandammonium insisted it would be in the tool box. It wasn’t. I had to order some more from Screwfix. Twenty-nine pence it cost.

I had to make a whole trip to Ely today to get something for 29p. To make it more worthwhile, I went to one of my favourite Ely eating establishments, where I was most productive with my writing until someone who had clearly just been running sat at the next table.

There were two clues that gave his activity away. The second, which I saw when I looked up because of the first clue, was his outfit of running vest, shorts and trainers. The first was the aroma. Perhaps his shower was broken, too.