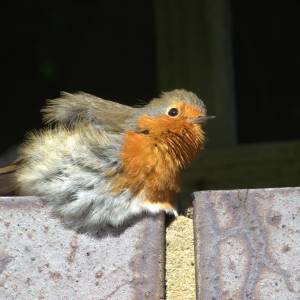 How big are they?

Today was Tuesday Birders day and a splinter group from my local Chichester RSPB group go out on a Tuesday to sites not normally covered by the official group.

We decided to do a spot of "twitching" and cross County lines from Sussex into Hampshire UK. There were reports of a Hoopoe that had been blown off course and had been resident in a horse's field for a couple of weeks. Luck was on our side and this was added not only to this year's list but my Great British all time list. This was bird 99 this year.

Moving on to a place in the New Forest called Ashlett Creek added 2 more to the list...Rock Pipit and Greenshank. Another twitch was to be late in the day at an Arboretum where Hawfinches are known to go and roost...just as the light was fading we spotted a single Hawfinch high in a conifer and he was number 102 for the year. The best though had to be number 99. As the birds were mostly seen through a scope no pictures were taken but near Ashlett Creek is the site of the old Fawley Power Station where they now store wind turbine blades. These are manufactured on the Isle of Wight and shipped to Fawley. They are craned off the ship onto a barge which carries just one blade at a time to the shore. These blades are so huge the tail end overhangs the barge. In the picture you can see the barge called MTB  Blade Runner Two. The other insets give you a rough idea as to the size of them. I took a photo at the top end of one with 2 friends standing at the tip...see how far away they are.