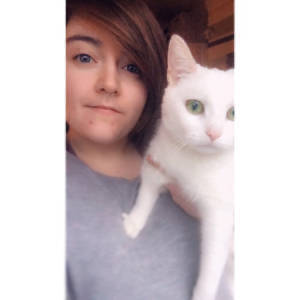 This was my Indy. She was hit by a car on the 10th of April. It broke my heart. I want to write about it to try and help myself heal as hard as it is to accept that it’s even happened.

I can’t believe it’s been a month, I miss her so much. My 3nd eldest baby of 4 lost, reducing the pack to 3, she was a total darling.

Funnily enough she had never been a very happy or loving cat, but as we had just moved house it felt the right time to let her out after a few weeks at the new house. She’s always wanted to go out but we had never let her because of fear of her welfare out there. But it had hit the point where we suspected it was really affecting her happiness by not being able to run free.

So we let her out.

She was a different cat, so happy, purring, loving and rolling around to be stroked, we donned her with a red spotted collar and she played and ran around and enjoyed herself endlessly.

That was for a week.

Exactly 7 days later I was busy painting in the living room and I thought I heard her crying at the window to be in so I got up and went to head to the door, I turned to look out the window as I passed Rachel’s mums room and I saw her lying there.

She was in the middle of the road. My blood stopped running and I just screamed INDIE’S BEEN HIT BY A CAR, and I ran.

I don’t remember running, but I was in the road in seconds on my knees. I knew she was gone when I got there and I couldn’t speak or breathe I just looked around in horror. Nobody had stopped, or cared.

I took her up in my arms she was so peaceful, she only had a tiny trickle of blood on her nostril and her eyes were looking up at me, angelic as she always had been.

Although my heart was splintering carrying her in the house I felt grateful that she had been killed instantly and had gone without knowing. I cradled her in my arms for about half an hour and I cried and I kissed her little nose and smelled her biscuit smelling fur and cried some more. Then I wrapped her in a towel and I carried her to the vets to have her cremated.

The problem is I can’t get the image of seeing her on the road and me screaming out of my head. It’s awful.

I am so grateful for having the chance to hold her and kiss her and tell her I loved her unconditionally. We have her ashes now, and I pop in to talk to her every so often.

She was one of my kids and it’s a cruel fucking world.