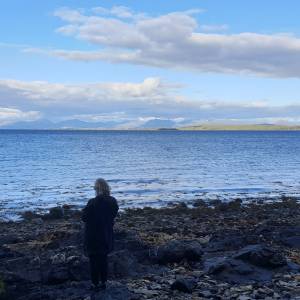 Despite the rain, we forced ourselves to go for a walk this morning. I was going to blip another shot of our autumn leaves but this lichen caught my eye towards the end of my walk.

Once we were out, I enjoyed it. At one point we seemed to be adopted to two dogs, I think they may have been from a nearby farm and felt like they were trying to round us up. I was worried that we would follow us through the woods all the way to main road but we obviously crossed some invisible boundary and they went their merry way.

This afternoon I hosted a zoom meeting  with 15 participants for a volunteer project I am involved in. I was slightly nervous but it seemed to go well and I enjoyed it at least.

My next task is to write a quiz which gets featured in an on-line magazine issued by the local radio station. I try and do mixture of general knowledge and local questions and sneek in a bit a Gaelic e.g. where does Ben Vrackie (the mountain which overlooks Pitlochry) get its name from.