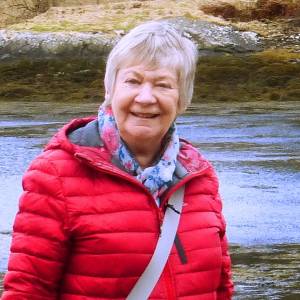 The temperature didn't rise above 0C today, and mostly was -1C.  It was very icy, even in the garden, but I had some exercise out there in the morning.

In the afternoon we drove out to Strathaven, just to get out for a bit, and my blips are both taken there, one of the village as we drove in, and one of the ruins of Strathaven Castle, through the trees.

In 1457 Strathaven was granted to Sir Andrew Stewart, an illegitimate grandson of Murdoch Stewart, Duke of Albany. Stewart, who built a new castle on the same site. In 1534 it passed to Sir James Hamilton of Finnart, who expanded the buildings.

It changed hands one last time in 1611, when the castle was sold to James, Marquis of Hamilton. The last occupant was Anne, Duchess of Hamilton (1632-1716), whose main residence was Hamilton Palace. The castle was abandoned in 1717.