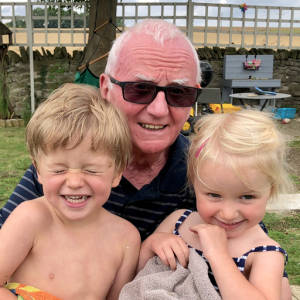 Funny how a blip snap can send you down memory lane.  County Durham was covered in coal mines and pit villages.  This cameo shows Hetton le Hole, a rejuvenated mining village and the statue shows an old miner taking his younger son 'down the pit' on his first day.  Notice the father and son bait tins.  (Called 'snap' in some parts of the UK).  The bungalows nestling under the laburnums are aged miners homes.

County Durham...  In the nineteenth century the growth of the mining industry transformed the landscape and the population of the county. Colliery villages sprang up everywhere and migrant workers from all parts of the UK swelled the workforce.  The industry had a profound effect on trade unionism, public health and housing, and mines safety. There were probably over 200 working mines, maybe more between 1869 and nationalisation in 1947 - when 127 remained.

Both my grandfathers worked down the pit.  My maternal GF was injured and invalided out of Dawdon Colliery when he received head and leg injuries in a stone fall.  He used to show me the scars and say he was attacked by a shark off Feather Bed Rocks off Seaham Harbour.  He died aged 77.

My paternal GF was killed (aged 58) in a stone fall at Shotton Colliery in 1945.

Interestingly, his father died at 104, was born in Tyrone, moved to work at Quarter in the Lanarkshire coal fields, became friends with firebrand Kier Hardie, founder of the Labour Movement and agreed to move to the Durham mines to further the 'cause'.  He was jailed for strike breaking one of Lord Londonderry's mines.  I recall GGF calling to our house with strawberries from his allotment for my mother and Dandy comics for me.