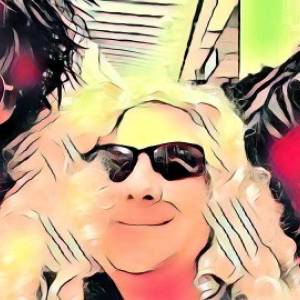 Photographic adventures of a Blipper
..well, she and her friend were speaking with an eastern european tongue as they followed me into Nottingham Contemporary for an exhibition by brazilian sculpturer Erika Verzutti.

On impulse I asked if they minded if I took a photo of them; the straw haired woman straight away said where would you like, to which I replied I'll just snap you at some point during the exhibition in some natural pose, which they were happy with..
..so was the exhibition assistant later when I volunteered their prior consent!

Music
Mrs M is out this evening with some rugby mums; looking hot!

An opportunity for me to play some more raucous music. Having a great evening playing Black Midi's second album which has similarities to both Grizzly Bear & The Mars Volta (formed after At The Drive In) - now playing the latters "de-loused in the comatorium" on CD.

Covid
Nottingham was very lively with plenty singing and inebriated people this afternoon; and is a much higher covid risk than where we live. I took the minor inconvenience of masking up throughout my trip, despite being double jabbed.