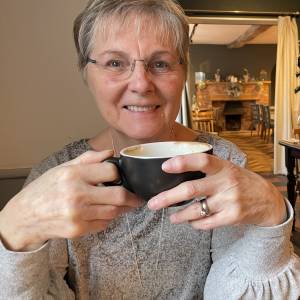 The changing face of Birmingham.

I took this photo yesterday when we were all on our way back to New Street Station. The family are in the distance.
They had a blast at the Lego Experience, (for Sammy’s 10th birthday yesterday,) which is situated opposite the Sea Life Centre amongst the canal complex with its quaint bridges, and basins.
There was a café there so I could sit down and rest from time to time.
Stephen and I had had a very early start to go back to our house for 8.00am from our refuge.
A shock to my system which is still rebooting itself!
Anyway, birthday breakfast finished and a trip into Birmingham on the 9.30am train, 4 adults, one pushchair, and 4 children, we walked the 20 minutes or so distance to our destination on our arrival.
It was a chilly, blustery, heavily showery kind of day.
Yet we managed to avoid the worst of the downpours.
It also did me good to have some exercise and fresh air.
The absolute delight at realising their destination, as we crossed over the last two humpbacked small foot bridges spanning the canal system, , which are beautifully built out of small bricks, was self evident!
So much to see and do.
The interactive models of the Birmingham City landscapes in and amongst all the usual latest Lego stuff like the popular Lego Ninjago, were amazing.
Plenty of hands on model making, play areas and some small rides.
It was fairly quiet and in between the booked sessions, the place is cleaned.
Usual hand gels, social distancing, and other regulations.
(We had our masks with us).
At one point there was a facility to make a small animated sequence using different technology.
The three older ones cooperated together each making model figures, then creating a “set” in which to move them around.
The two older ones knew to place the figures differently each time, then take a frame shot.
All this was done with a kind of small computer screen attached to a moveable stand.
They showed Toby where to place his figure, then replace it each time in a different position.
The whole thing was then played back on the small screen as an animated short sequence.
Never ceases to amaze me how the kids of today have mastered so much technology.
These three being 10, 8 and 5.
Our youngest granddaughter busied herself using giant Lego bricks constructing a tower with grandad whilst the others were doing their thing.
The two hours flew past. (Allowing for a half hour in between for some snack lunch at the little café).
We arrived back mid afternoon.
More cards had arrived for birthday boy.
We had a piece of cake and a drink before coming back here just before teatime.
I had an early to bed night!
It will be a slow day today.
The sun is shining.
The weather is crazy.
After floods, torrential rains and gale force winds on Monday during the night in certain parts of the UK we are now forecast two days of temperatures up to 20C!
Mind you, I’ll take that, as they say, anyway when it’s on offer!