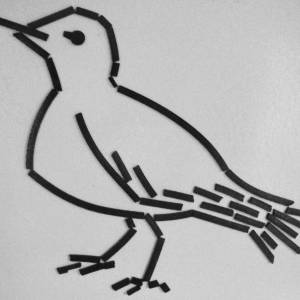 I was intrigued by the "Pep Ventosa Autumn Tree" posted by Evie11 the other day. I hadn't heard of his work and found it interesting, so I thought I'd give it a try. These are my first two attempts.

The main image is an abandoned house overlooking Goose Cove. I've passed it many times over the years and can't recall ever seeing anyone in or around it, even in the summer. I felt a bit conspicuous pulling into the driveway and getting out, since its just off a well traveled road. It sure looked empty inside, but I felt too nosy going up and peering through the windows. So I just took a bunch of photos from the front yard and left.

The extra is a glacial erratic off in the woods near Pretty Marsh. It's an impressive specimen - quite large, without any other rocks nearby. I'm not sure how satisfied I am with the result, but it definitely captures the feel of walking around the rock, which is surrounded by deep moss and spruce trees.

It was a grey morning with occasional rainy spells. I wandered along the shore for a bit before heading home and spending the rest of the day lazing around the house.