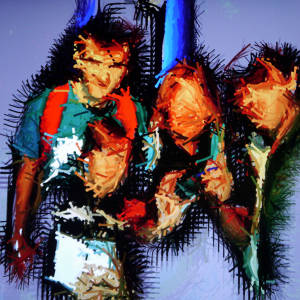 I was awake early checking trains and travel arrangements as today our family, Grandad and Jane had arranged to meet together at 1.30 to say goodbye to Ben and Sophia who are off on their travels for 9 months..  And, when we planned it, a Mexican restaurant in central London seemed ideal.

However, thanks to Storm Eunice there were no trains from Cambridge (see extra) and so I was scrabbling around trying to get information about trains from Croydon, Oxford and Brighton ready to cancel.  Information was thin on the ground, but it 'seemed' possible so eventually we decided to go for it - it was our last chance to get together after all.

The Cambridge contingent decided to drive to Walthamstow and catch the tube.  But boy it was very stressful, the rain poured, the M11 kept grinding to a halt and we narrowly avoided an accident when three cars right in front of us concertinered into each other.  When we got to Walthamstow we spent 30 minutes trying to park the car.

James got to the station in Oxford to find his train cancelled - and then also the next two....  and almost gave up ....

Sam always was going to have a difficult journey as there was already a bus replacement service between Brighton and Three Bridges (engineering works) and then he had to deal with the tube.  He had a frustrating time trying to get across London and had to set off the earliest out of all of us.

Dad and Jane had the most straightforward journey (that nevertheless involved car, bus and train) and arrived half an hour early... Sam was just about on time ... we were 1.5 hours late and James, 2 hours late.

BUT - against all the odds - we got there!  Dad, Jane and Sam had whiled the time away with a few cocktails & when the stragglers arrived everyone was starving.

The meal was lovely and all the more special for seeming incredibly unlikely to come off for most of the day.  Except it did, thanks to James, Sam and Martin especially making such a determined effort.

Adios Ben and Sophia.  We love you.   xxxxx