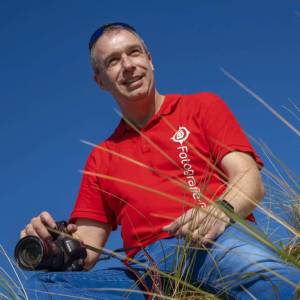 Finally the water goes down the drain! After yet another storm, called Franklin, passed over our country, bringing huge amounts of rain with it. So much, that the drain at our barn gave up and there was a real danger the barn would flood. That would be a problem because of everything in there, including horses and ponies.

So instead of creating a special image for this milestone blip, I ended up fighting the water outside in wind and rain, together with my father-in-law. He knew where the drain pipe ends and where it should dump the water in the ditch, but in the dark we just couldn’t find it. In the end we settled for plan B, which was to use a pump to pump the water to the ditch in that way. It worked and we managed to prevent the water from entering the barn. When I checked just before I went to bed, the rain had stopped and the drain was working well enough for the pump to be switched off for the night, as can be seen in this image.

A special blip this will be nonetheless, even though not in the way that I had wanted…