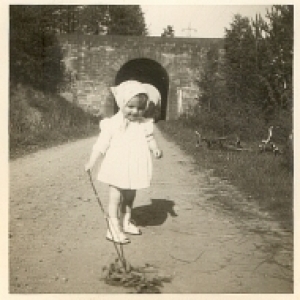 The 1. FC Kaiserslautern will be playing in the German 2nd league again!

After 4 years in 3rd league the Red Devils (Roten Teufel) did it!
They won the relegation game against Dynamo Dresden last night in Dresden and since 10:30 pm fans and the city of Kaiserslautern are going crazy. Celebrations everywhere, every café, every pub, every street.

Celebrating all night and all day. I saw and heard the first group of people at 6.50 in the morning in front of a 24/7 bar close to the trainstation. Very civilised, just pure joy despite the alcohol that must have been involved.
.
All day long we had fan choirs on the streets and it was fun listening to them in the office. It reminded me of the atmosphere in the city during the FIFA World Cup 2006. Everybody was celebrating, everybody was in a good mood.

Unfortunately I did not get a single decent shot. My blip was taken on my way to the train station and doesn't do the atmosphere any justice.
On the last meters towards the train station I had to walk in the middle of the street because thousends were coming the opposite direction and walking to the city center for more celebrations with the team at the Stiftsplatz.

Edit: added an extra, photo taken by my colleague a few minutes ago