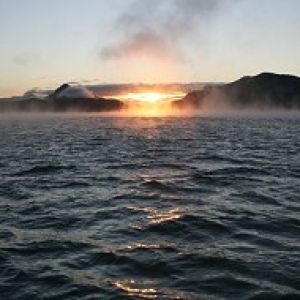 Dirt road all the way from Mt Coolon to Burdekin Dam, just over 100km of it. First half was good, second – well – it was much rougher. Just before we got there, I saw a snake on the edge of the road, it was about a metre long. First one I have seen, and hopefully the last.
The Burdekin Dam has a catchment area of 130,000kmsq and holds 1.8 million megalitres of water when full. It is the largest dam in the state of Queensland. Lake Dalrymple is the name given to the lake that formed behind the dam.
They used 630,000 cubic metres of concrete, the dam wall is 876 metres high, with a 504 metre spillway which drops 50 metres to the river bed. Construction on the dam started in 1984 and completed in 1987.
But it wasn't the place that we thought we had driven past several years before. The camping ground was on high ground above the dam, not down by the waters edge.
When we had arrived there, you drive along the bottom of the dam on the lower side by the dried up river bed, at the base of the spillway. There was a group of Pelicans here, but those photos didn't turn out any good.
We decided that we would only stop for the one night, and about 4.00pm went for a drive down to were the boat launching ramp was.
There was a couple of Pelicans on the sandy beach, plus a few other birds and some kangaroos or Wallabies – not sure which they were. They weren't very tall, so most likely Wallabies.
There were several with joey's in their pouches, but I managed to get this one the best.