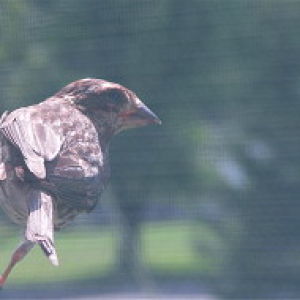 The Burr House is a U.S. registered historical building on Fort Hill in the Oxford village. It was built in the Federal style as a wood frame residence. Later a Victorian and a modern addition were built, including indoor plumbing. Built in 1810 to 1812-- at the end of the young United States' war with England.
Theodore Burr was a founding settler of Oxford and a pioneer wood bridge designer and builder. He is said to be the greatest wooden bridge builder in the United State history. His relative Aaron Burr is infamous as a senator who killed Alexander Hamilton, the first treasurer of the United States. We have had trouble with Congressmen from the start.
Theodor's home is now the Oxford Public Library where I found this information about Burr and the house. The interior is maintained with the original wood flooring and woodwork. The staircase leads to the second floor bedrooms which are now used as community meeting rooms for small groups.
I have blipped this building before on sunnier days; so I thought I would try to get a different historical old home but as I left the library the snow had returned thick and heavy making further photos impossible. And it is still dumping down beautifully.
I have pushed the snow off the drive two times today. Winter is here for sure now.

Also, my new Olympus SZ-14camera has arrived. I spent more than an hour getting to know it today. I expect to be able to use it by Christmas or New Year's eve.. It is like a complicated cell phone, I think.
I feel inadequate. Strange that a Small Black box does that to me!